Instilling a safety-first culture at the Catalina Huanca mine

Changing culture takes time, persistence and focus. In 2020, at the Trafigura mine in Catalina Huanca, Peru, over 61,000 man-hours were devoted to training and more than 1,600 inspections undertaken to improve safety performance. Catalina Huanca is now one of our bestperforming mining operations from a safety perspective. Its lost-time incident rate has dropped by 60 percent since 2017 to 1.5 per million hours worked in FY2020 (2017: 3.77).

The challenge
Some years ago Trafigura recognised a persistent problem with safety performance at the Catalina Huanca mine in Peru. We had been addressing it with a raft of measures: we ensured that teams had the latest safety equipment; all staff undertook safety training; there were limits on working hours; and there were strict protocols for those operating heavy machinery. Regular maintenance was also scheduled.

And yet reported incidents remained high. The working days lost through injury metric, LTIR, of the Peruvian mine continued to lag behind other Trafigura-controlled mining operations.

The scale of the problem was tragically highlighted in August 2017 when two experienced contractors lost their lives while working under an improperly secured roof section of the mine.

This incident was the catalyst for a thorough and radical review of operations. A Catalina Huanca Health and Safety Steering Committee was set up centrally. An early insight was that cultural factors played a key role. Best practice systems were in place, but it was apparent that safe working was not always the top priority for local managers.

Understanding cultural factors
Trafigura commissioned independent specialists to do an in-depth audit of the working culture at Catalina Huanca. They conducted detailed interviews with 133 managers, supervisors, employees and contractors, which evaluated cultural conditions and their impact on behaviour. Interviewees were asked about the quality of the leadership, the level of employee involvement, the effectiveness of two-way communication, the attitude to blame and the approach to learning and improving.

The review revealed Catalina’s culture as one with good intentions but poor implementation. There were some areas of strength, but there was also significant scope for improvement.

One important finding was the disconnect between management and workers, which had clear safety implications. Employees and contractors pointed to a lack of collaboration with their managers. They claimed that when changes were being planned they were not consulted. If they raised safety concerns they rarely heard back on progress. Some were hesitant to raise such concerns, at least in part because they worried that they or their co-workers would be blamed. Productivity was perceived to be management’s main focus. Workers felt disempowered and unable to take personal responsibility for their working environment.

Acting upon insights
Trafigura acted swiftly to change the cultural conditions. We have strengthened safety skills and empowered workers. We have improved dialogue between managers, supervisors, employees and contractors, with regular meetings, personal recognition for improved safety performance and direct feedback on progress to any workers raising safety concerns. Specific safety responsibilities have been allocated to workers at all levels. Safety champions are now recognised and rewarded, with monthly prizes for the best performers.

A manager communication programme has helped build bridges with workers. There is an increased managerial presence in the workplace and a zero-tolerance policy on disempowering speech and behaviours. Where needed, we have brought in new managers and supervisors with a more flexible, collaborative approach and a better understanding of safety concerns. We have also introduced a revised approach to productivity targets that makes proper allowance for safety stoppages.

"Trafigura commissioned independent specialists to do an in-depth audit of the working culture at Catalina Huanca.”

Reduction in lost-time incident rate since 2017

Outcomes
There are encouraging signs that our investment is paying dividends. Workers are overcoming their earlier reluctance to flag safety issues – there were over 600 reports of near misses during FY2020 – and the total recordable cases frequency rate has dropped by 63 percent from 7.0 in 2017 to 2.6 in 2020.

Furthermore, the lessons learnt at Catalina Huanca are being applied across the business, leading to improved safety performance at our other locations.

A safety-first culture at the Catalina Huanca mine in Peru

A safety-first culture at the Catalina Huanca mine in Peru 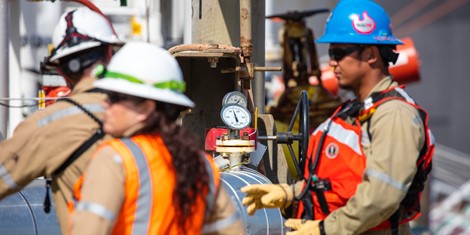